Home » Blog » 7 visa-free EU countries, which can be reached by train from Ukraine: Price, directions, time

7 visa-free EU countries, which can be reached by train from Ukraine: Price, directions, time 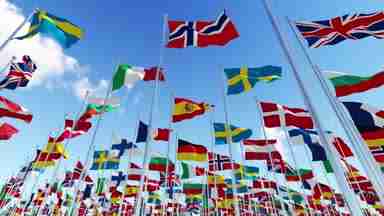 Starting from June 11, a visa-free regime of Ukraine with Europe began.  in Ukraine, there is also a railway connection with Europe. Now there are 7 European countries, where you can go by train from Ukraine: Europe travel – Poland, Slovakia, Hungary, Bulgaria, Czech Republic, Romania, Austria.

From Vienna, an uninterrupted car will run daily from December 11th. It will be sent at 16:42 local time and will arrive in Kyiv the next day at 17:11 Kyiv time.

The wagon is designed for 30 seats. The price for a ticket at “Ukrzaliznytsia” has not yet been named, but noted that it may vary depending on the exchange rate.

To Poland, daily depart for four trains. For example, every day at 16:52 from Kyiv the train Kyiv-Warsaw runs. The duration of such a trip is 15 hours 37 minutes. The train “Warsaw West” arrives at 8:00 am for 32 minutes.

At the east and central train stations, the train arrives half an hour earlier. During the journey, the train makes long stops in Polish cities. For example, in Dorohusk city for an hour, in Chelm for 17 minutes, Lublin for 27 minutes and in the city of Luk 12 minutes.

The new train Intercity goes to the Polish border town of Przemysl. You can sit on the train in Kyiv and in Lviv. In addition to these two main stations, the train stops at Svyatoshino, Korosten, and Pidzamche.

The train is departing daily from Kyiv at 6 hours 45 minutes and from Lviv at 12 hours and 17 minutes.

The duration of the route is 7 hours 40 minutes. In Przemysl, passengers arrive at 13:25 in Polish time. Such timing was not accidental, but that passengers could then get on a different train to Krakow or Wroclaw.

The cost of the ticket Kiev – Lviv – Przemysl from 406 hryvnias. Tickets Lvov – Przemysl will cost 172 hryvnias.

From Lviv, there is also a train to Wroclaw, with a stop in Krakow. The train departs at 22:20 from Lviv Central Station and arrives in Krakow at 5 hours 28 minutes, and to Wroclaw at 9 am 54 minutes.

The duration of the trip is 13 hours, and the cost of tickets is from 1800 hryvnia.

More recently, the state campaign “Ukrzaliznytsya” has launched another daily route: Kovel – Helm. Charms have convenient transfers to Warsaw or Lublin. The train departs from Kovel at 11 o’clock to 53 minutes and arrives at Thelma at 13 o’clock 41 o’clock in the local time.

Travel time – a little less than 2 hours, and the cost of tickets from 130 hryvnias.

To Slovakia, you can get on a non-movable trailer car: Kyiv – Bratislava. The train runs 5 days a week (does not go on Thursdays and Fridays) and runs at 23 hours 57 minutes from the Kyiv-Passenger station.

And from Lviv, the train will be departing at 10 o’clock and 10 o’clock. Stays in Ukrainian cities: Zhmeryntsi, Khmelnytsky, Ternopil, Lviv, Mukachevo and in the border town of Chop.

In Slovakia, the train stops in Košice, Drove and arrives in Bratislava at 5:00 and 25 minutes in the morning in local time. Total in the route on the route Kiev-Bratislava – 30 hours.

A trip on such a route will last 32 hours and 25 minutes. The train goes through Vinnytsia, Khmelnytsky, Ternopil, Lviv, Mukachevo, and Chop. Then he stops in passing almost the whole of Slovakia: from Cierna na Tisza and Kosice to the city of Žilina.

In the Czech Republic, the train enters through the frontier city of Tšinec.

Daily train Kyiv – Budapest is from the Kyiv-Passenger station at 20 hours 22 minutes. The train goes through Lviv, from which it takes place at 5 hours 43 minutes. To Budapest, passengers arrive at 18 hours 37 minutes local time, and the duration of such a trip is 23 hours and 20 minutes.

Trains ride from Romania to Kyiv to Bucharest. The train runs through Vinnytsia, Kamyanets-Podilsky, and Chernivtsi. It reaches Romania via the city of Vichy, Suceava, Bacza. From Kyiv, the train runs at 20 o’clock for 5 minutes and arrives in Bucharest at 22 o’clock and 56 o’clock in local time.

All in the way the train is 27 hours.

The route to the new direction of Lviv-Varna will be launched from June 15th. Actually, not a whole train will go, but a trailer car in the Minsk-Varn train.

The train will pass through Ivano-Frankivsk and Chernivtsi. Already known price for tickets Lviv-Varna – from 2400 hryvnia, and the duration of the trip – about 32 hours.

The train will run every 10 days.